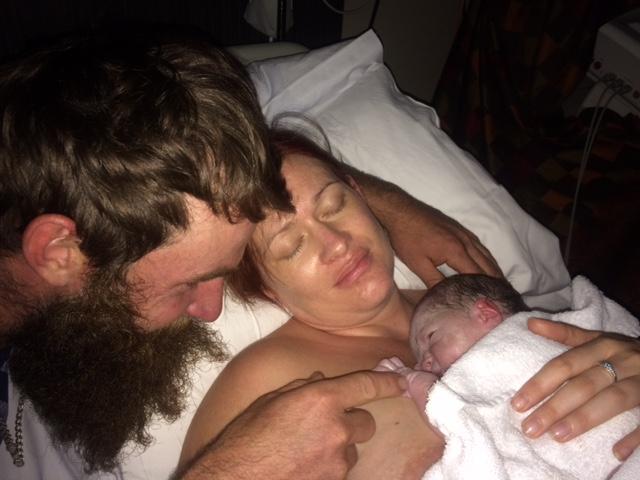 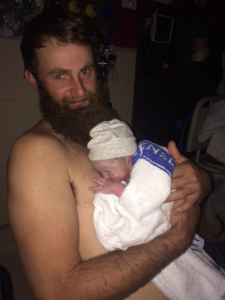 I woke up at about 2.45am on the 5th March. I got up out of bed, had a snack and went to the toilet. Went back to bed and heard/felt a slight pop!

At this point I really didn’t know what it was and kind of ignored it and focused on getting myself comfortable in bed again. Then within a couple of minutes I started to feel a very slight pain in my belly which disappeared.

This happened again two more times then I got my phone and started timing to see if they were surges and if they were regular. I then realised that the popping sensation that I heard/felt must have been the start of labour.

I got out of bed again and felt my membranes release. I was a little surprised that baby was coming so soon. I phoned Sonya, my midwife at 3.00am and told her I was in active labour. We agreed that because I was only 35 weeks pregnant that I should birth baby in the hospital instead of having a homebirth like I had wanted.

After that phone call I then tried a number of times to call Wade, who at the time wasn’t home. (I didn’t actually know where he was as I had told him to leave the day before – we had a fight!) He was obviously sleeping and didn’t answer.

The power of affirmations…

At this point the HypnoBirthing affirmation – “I am prepared to meet whatever turn my birthing takes” enters my thoughts. I remained calm and completely focused even though I was by myself, in active labour and unsure as to where Wade was!

I trusted my instincts and called his Mum to see if he was staying at her place. She surprisingly answered and yes I was right, he was at her place at Oakey.

I told him he better get home now because I was in labour and that he needed to take me to the hospital. At this point my surges were getting more intense and every time I had one I would have to stop what I was doing and concentrate on my surge breath.

I made one last call to my Mum to tell her baby was coming so she could make her way over to my house to watch the other two kids. Whilst I was waiting for my Mum and Wade to arrive I gathered a few more things to pack into my hospital bag, put some shoes on and the rest of the time I was just pacing around the house concentrating on my breathing and getting through each surge.

By about 3.50am both Wade and my Mum had arrived. I went and said goodbye to Calais who had just woken up and to Emme who was still sound asleep. All of the 25 minute drive to Toowoomba I had my earphones in listening to the HypnoBirthing Affirmations track on repeat.

I remained calm and completely focused.

I continued my breathing techniques and tried to keep my body still and at ease whilst having a surge. I do remember waving my arms a little during surges in the car. Other than telling Wade that he didn’t need to speed, I was pretty much silent the whole trip there.

Upon arriving at hospital at around 4.30am, I was sent straight up to the birthing suite, where I was constantly pacing back and forth and round and round during surges. Sonya arrived soon after. After I had been admitted I was then told I would need to have IV antibiotics administered straight away and be put on constant CTG monitoring until baby was born as I was only 35 weeks pregnant.

Although that was the opposite to my birth preferences I agreed without much fuss but was still a bit irritated as I could only walk a few steps whilst hooked up to the monitor and IV. Keeping active by walking during surges made them more bearable for me.

The OB wanted Sonya to do an internal to see how far progressed I was. This happened at about 5.30am. Sonya knew I didn’t want any progress updates about the thinning and opening phase so she did the internal and said all was fine. After the internal I stayed on the bed and continued listening to the affirmations and doing my breathing.

At this point the HypnoBirthing affirmation – I am prepared to meet whatever turn my birthing takes – enters my thoughts.

I knew baby was coming very soon as I started to feel a lot of pressure and I felt an uncontrollable urge to, dare I say it – push! I remember I actually did start to push a couple times but then realised, no time to start to breath down.

So I think I did a total of two birth breaths and Dexter was then born at 6.02am. Wade lifted him up onto my chest where we had about 35 minutes of uninterrupted skin to skin bonding. His cord was clamped 20 minutes after birth, after it had stopped pulsating.

The OB was in hurry to clamp it but we stood our ground and said no we are going to wait. I birthed the placenta naturally straight after the cord was cut.