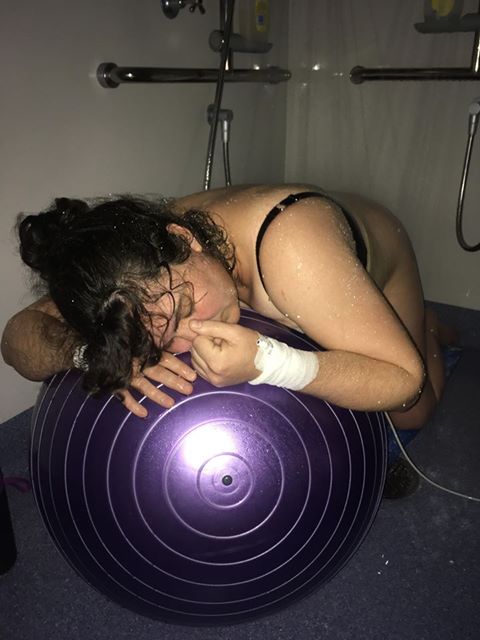 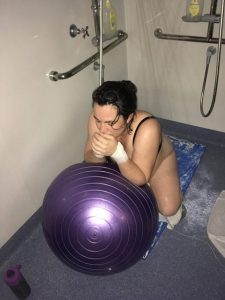 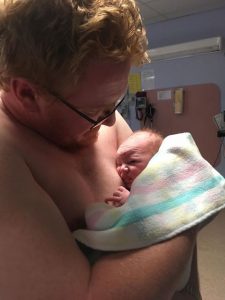 So after a somewhat disappointing appointment with the hospital obs on Thursday 4.10.18 (40weeks) at which we’d agreed to make a c-section booking ‘back up plan’ for 40+11.

Booking made mostly to keep them off my back for another week and a bit as bub was already sitting so low that the midwife and I were pretty certain she would be here by the end of that week. Went home that night and managed to get kids to bed so hubby and I got some oxytocin flowing!!!!

Woke up around 2am with period like cramps and generally couldn’t get back to sleep between them and the 4 year-old who wanted snuggles!!

Hubby went to work around 7ish and I decided may as well get up and see what happened. Went for a Bowen treatment at 11ish and took the kids to McDonald’s for lunch.

Started to get really uncomfortable while sitting at maccas so much to the kids disgust rounded them up and took them home. I tried to meditate with my hypnobirthing tracks but it was very hard to relax properly with two boisterous boys in the house.

Around 3:30 things had ramped up and I figured I’d better let my midwife know that this was something more than just cramps. Got hubby to come home and take the boys to my brothers and hopped in the shower for a bit. Laboured at home either on the fit ball or in the shower till my waters broke around 7:30ish.

Called the midwife again and said we should probably look at heading in as the intensity was ramping up. She was out of town and said she would give us a call when she was at the hospital. Spent another hour labouring at home. Finally headed into the hospital around 8:30. One of the most uncomfortable car rides ever!!! Thank god it was only 15mins.

Labouring in the shower…

Once up in birth suite my Midwives got a cannula into me and explained that we needed to put a clip on baby as there wasn’t a wireless monitor available.

There was a bit of difficulty getting the clip positioned properly to read but I’m really not sure how long it took but those were some of the most uncomfortable surges.

Finally I was able to get up and head to the shower. Laboured in the shower with the fit ball managing to breath through most surges fairly easily.

Started breathing baby down and got to the point of crowning were things got tricky. Not exactly sure why but I just couldn’t get her past this point.

Her heart rate was practically stopping with each surge and I could feel myself struggling. The midwife explained they would give me another couple of surges to try and get baby out and then I would need an episiotomy.

I really tried but just couldn’t move her any further. Midwife explained later that she could see evidence (buttonholing I think she called it) that indicates I could well tear internally and thought the episiotomy a better option.

Midwifes and one of the obs managed to turn me from my kneeling position to sitting and went to give me the local for the episiotomy but I was so stretched from crowning they couldn’t safely get the local in so explained they would need to do it without.

I have to say both my midwife and ob explained everything carefully and let me know what they were doing before doing it making sure they asked my permission.

Episiotomy was done with two quick nicks which did bloody hurt but bub came out quickly and smoothly on my next surge and despite having little to no heart beat for two to three surges by then quickly recovered on my chest.

Little Meredyth was born at 11:25 not even 24hours from my first cramp.

Laboured in the shower with the fit ball managing to breath through most surges fairly easily.

We managed to let the cord go white before cutting but due to the need to get me off the bathroom floor to fix the episiotomy we did need the oxytocin to get the placenta out.

Despite things not going quite as smoothly as I’d hoped I am stoked that I’ve only needed Panadol for pain relief and bub has not left my side. The doc who did the episiotomy came back and said how happy she was that I had managed the vba2c and several of the nurses on the ward commented that I was the vba2c mum and it was so awesome that I had managed it and they wished more mums would be able to stand up to the system. After talking with hubby I’ve also found out that apparently the consultant ob had been standing at the hallway door wanting to get me into the bed for quite a while before the did the episiotomy.

So glad I had my awesome midwifery team with me to keep that pressure away and that the lovely register who did the episiotomy was happy to do it where I was and give me the best shot. Overall such an amazing experience.

A huge thank you to Tamara and David for sharing their incredible journey towards a successful VBA2C. The determination of this mumma couldn‘t be underestimated. I appreciate my couples taking the time to share their honest journey’s with others. B x